I think Roaming Profiles are now deprecated. I will be moving all my users to Local Profiles supplemented by User Experience Virtualisation (UE-V) over the next 12 months. See comments below.

I have recently been imaging Microsoft Surface 3 computers for use by staff in a school. All our staff have roaming profiles so that they have the same desktop on every device that they logon to. This makes it easier for them and reduces support costs.

The second time the user logs in they cannot launch Edge and some other packaged applications.

While it seems absolutely incredible that Microsoft would launch Windows 10 with this key feature broken they seem to have done so and this is a widely reported problem with no official solution (2016-02-10).

To reproduce the issue

The first thing we need to do is fix known incompatibility issues in domains that have both Windows 10,8 and Windows 7 users before moving on to fixing our issue.

The root cause seems to be that when a user logs out Windows 10 sets essential registry keys to read only. When they logon again these keys are in the wrong state and packaged applications including Edge cannot launch.

We will fix this with a logon script.

You will see the this script can write to the Application Event Log for debugging purposes but I have commented it out on production.

Create a group policy to apply this as a logon script

Create a group policy for your domain users called “User-Windows10RoamingProfileFix”. This will be targeted to Windows 10 computers using the WMI filter we created in an earlier step. 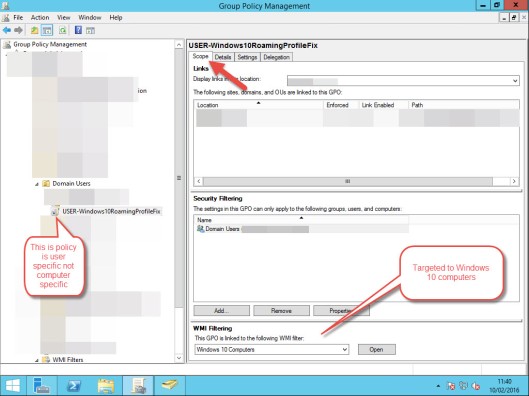 The actual script location will depend on your existing configuration. 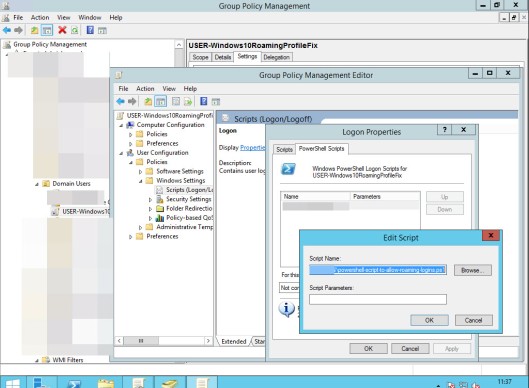 What if it fails?

The first thing to do is verify that your group policy is being applied. Logon as RoamingUserTest1 and open an Administrative Command Prompt.

If the script is running then Edge is not running for other reasons. Check your Applocker settings.

You now have a working domain joined laptop but remember that this has taken its updates from Windows Update before you joined it to the domain. If you use SCCM for your updates you may wish to do a clean build, join it to domain and install the SCCM client. You can then manage updates through SCCM.

This is a difficult solution and I relied on the contributions of many authors, thanks must go to my own colleagues and to Christian Ullrich and Ben Hastings72 who contributed so generously to the thread on the Microsoft Community forums.