Businesslink.gov.uk has gone to be replaced by the the “Simpler, clearer, faster”, ugly and inaccurate GOV.UK

I worked for Businesslink and I was proud of the job done by my myself and my colleagues. For those who don’t know Businesslink was a website provided by the DTI (later HMRC) for small businesses. It provided accurate useful advice for people who do their accounts on the kitchen table on Sunday.

Businesslink was a very expensive website. It cost £ 35 Million a year to run, I will not seek to justify this expense but I will note that to run a highly available, very secure service that contains upwards of 10 applications is not cheap. The contact was awarded to Serco after a very competitive bidding process that impressed even the most cynical contractors with its fairness and rigour.

The site spent £ 4.6 Million pounds a year on content. Every day Businesslink editors worked with civil servants in other departments to turn totally incomprehensible regulations into straightforward guidance.  We then tested the presentation of this content on real users to ensure that they could understand and use it.

The average dwell time on the site was over 8 mins and satisfaction was very high. The cost of content is small when put against what businesses spend on accountants and lawyers who provide the same advice at £ 200 per hour. Eighty percent of the material from Businesslink has been discarded. So having paid £ 12 Million for the content we have now thrown it away.

For me, the most important thing about Businesslink was it showed that someone in Government actually cared about the small businessman because we did.

The new site is a disgrace. Search for “I want to dismiss someone” and the first result you get is “Dismissal: your rights”. Whoever decided to combine Businesslink and Direct.gov was an idiot. It is also full of errors and carries adverts for NSI savings and investments. What next – adverts for loans from RBS because we own them? 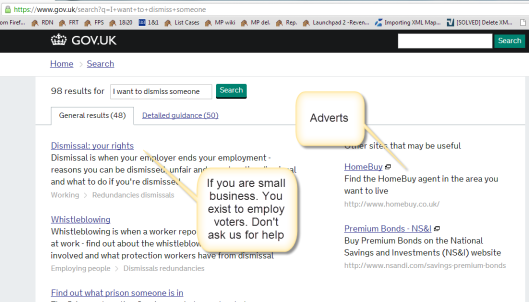 If you are interested in the very sensible technology stack that has been adopted to push erroneous, ugly content to public your can read about it here.

2 thoughts on “We should mourn Businesslink.gov.uk because GOV.UK is crap”